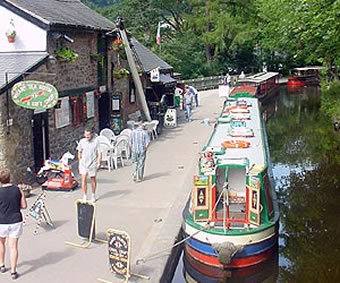 From anywhere in the Clwydian Range you can easily reach a variety of attractive towns and villages. Most of the towns in the area have markets where you are likely to hear Welsh spoken.

LLANGOLLEN is one of Wales's most popular resorts with its river, canal and steam railway, not forgetting the famous International Eisteddfod held each year in July

DENBIGH is dominated by its castle and parts of the mediaeval town walls can still be explored.

The market town of MOLD holds thriving markets in the streets every Wednesday and Saturday. Renowned Theatr Clwyd offers a wide range of productions with many well-known actors. Tel: 01352 756331

The seaside towns of PRESTATYN and RHYL have clean sandy beaches while a walk along the promenade in Victorian LLANDUDNO can be followed by a trip by car or tram up the Great Orme with its spectacular views and copper mines. Close to Llandudno is the picturesque town of CONWY, home of a spectacular castle, magnificent 14th century merchant's house (National Trust) and the smallest house in Wales by the attractive harbour.

ST. ASAPH is a small city with the smallest ancient cathedral in Britain and woodland walks beside the river.

The National Trust's ERDDIG gives a unique insight into servants' lives in the 18th and 19th Century. Also owned by the Trust is BODNANT GARDEN, world famous for the dramatic colours of rhododendrons and laburnum arch and its wooded valley, stream and wild garden.

PORTMEIRION, designed by Clough Williams-Ellis in 1926, is the delightful Italianate village used in the cult TV series 'The Prisoner'.

CHESTER, just over the border in England, is a fascinating Roman city with famous two-tier 'Rows' of interesting shops.

LIVERPOOL, City of Culture for 2008, has two famous cathedrals, a lively dockland area, museums and art galleries, and of course the Beatles Experience.